It wasn’t until Anthony Bourdain extolled the virtues of the Waffle House during a show about Atlanta that I took the humble roadside eatery into consideration. The squat square building capped by a yellow awning and the stark  self-explanatory words “Waffle House”  would be easily overlooked if not for the tall yellow scrabble-tile looking road sign. An Eater.com story by Khusbu Shah explains, Bourdain’s fascination with the place, as exotica,

“Bourdain revealed that while he did try local delicacies like hominy and hoppin’ john, he was most blown away by one discovery in particular: “The glories of the Waffle House.” Bourdain explained: “Talk about exotica, I’ve never been. It’s apparently a place you can go no matter how wrecked and obnoxious you are or how late at night… they are nice to you.” Amused by Bourdain’s admission, Colbert reveals his favorite part about the 24-hour chain: “The nice thing about the Waffle House is that the menu is all pictures, you don’t have to read.”

Yes, yes, I know those of you in the southern states and Indiana [southern in spirit] are rolling your eyes at Yankee anthropological attempts to understand and appreciate “the south” with a mocking undertone. I confess, I myself, entered the with an unacknowledged sense of judgment that quickly evaporated.  First of all, the waitress put  Jim and I at ease by making light of our misguided attempt to enter the diner through the front (where there is no entrance), “I was wondering where you were going?” she sweetly chuckled. Menus were on the table. Coffee soon followed. This was the first time I could choose to have my hash browns: smothered (with onions), capped (with mushrooms), diced (with tomatoes) and peppered (with jalapeno peppers). It was strangely satisfying to personalize otherwise standard and uniform potatoes. Even in the morning light the atmosphere was welcoming as Bourdain claimed. It didn’t take much to imagine what an oasis it would be in the darkness when everything else is closed and one is hungry, hungover, high or just sad and lonely. This is not a Edward Hopper painting of modern alienation rather a calming place  at the counter, watching the eggs sizzle, catching the wafting scent of waffles and allowing oneself to be held in the dance of hardworking cooks and waitresses around you. You are not alone, even if eating alone.

I happily had good company during  the post-holiday weekday morning rush.  Perhaps because of my low expectations or maybe the food WAS really just good, I don’t know, but I found the hashbrowns light and flavorful (not laden with grease), the eggs gently cooked sunny side up and the toasted (and buttered!) biscuit a perfect platform for strawberry jelly.  The line of people waiting against the entry wall made sense.

Just like the signage and building, the food and experience held no pretensions of grandeur, competition or beneficence. I suppose that honesty and simplicity is one of the wonders of the Waffle House [open for 60 years, year-round, including Christmas].

Here is a recent article shared on facebook about Waffle House (Thank You, Rachel!). Note: They take Valentine’s reservations. Despite my appreciation, I don’t think we’ll be attending.

Wishing you all happy roadside eating, 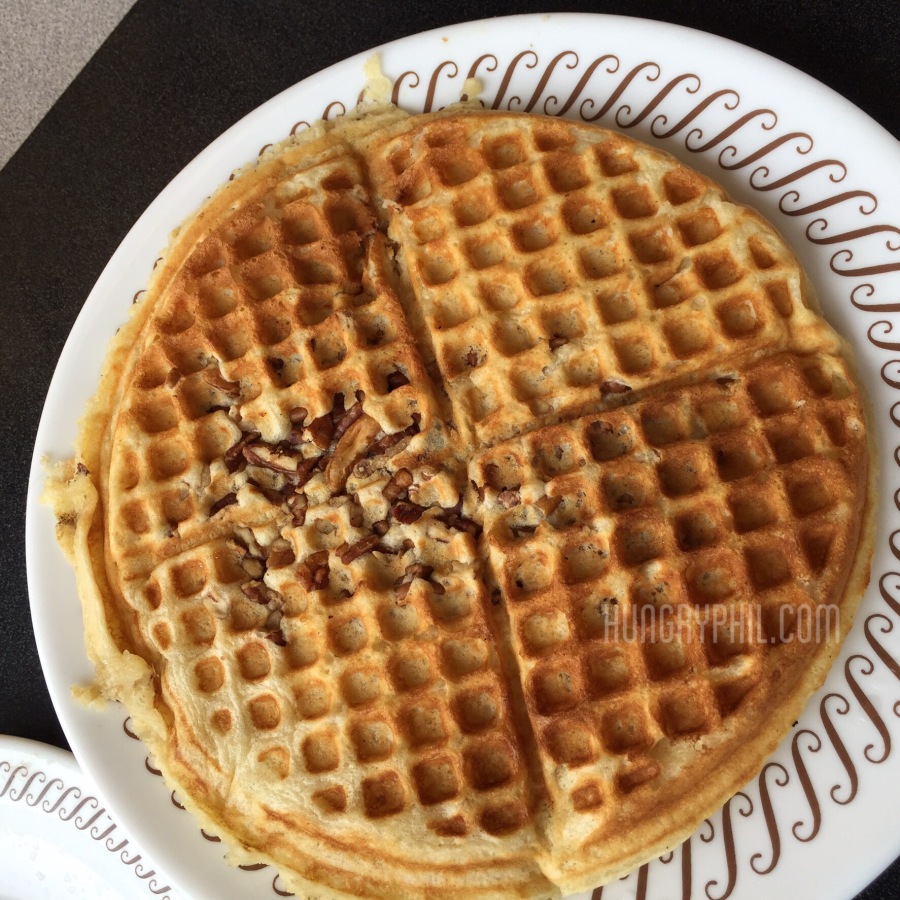 2 thoughts on “Wonders of Waffle House”