Behind this 19th century ornate peacock gate is an equally glamorous design and food history. A wedding present for Bertha Honore from Potter Palmer, the Palmer House Hotel is a piece of Chicago history. The ceiling includes murals of Venus, the goddess of love, framed by Neoclassical Empire style of glam and glitz. It burned down in the great Chicago fire of 1871, only to be rebuilt bigger and better afterwards. 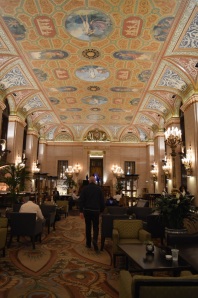 Yes. Let this knowledge sink into your consciousness and memories of chocolatey, dense, moist deliciousness. It is probably the most coveted dessert in our home, rivaling its cousin warm chocolate chip cookies. The brownie is America’s Proustian Madeline that conjures memories of childhood pleasure and freedom. A “to-go” version of this confection at the Palmer House comes boxed and wrapped with a ribbon. The packaging also includes a brief history and the original recipe. The taste can be described as dense yet delicate, with a texture between fudge and cake that melts in your mouth. The walnuts that compose the top layer have a light glaze. The recipe says its an apricot glaze but a fruity taste is hardly noticeable. It is a familiar (as in brownie mix brownies) but elegant experience between candy and cake. The “to-go” version is perhaps the best way to eat this little morsel since it was designed to be a part of a boxed and portable, working lunch for ladies discussing the 1893 Chicago World’s Fair. The Brownie represents a designed American cultural experience.  We say as American as Apple Pie but I think the saying should be as American as Brownies. This Fourth of July, I’ll have to bake brownies. Let’s start a new trend and vote for the Brownie as America’s dessert. “Bite into a piece of history”………indeed! 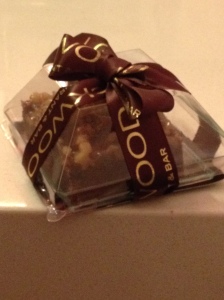