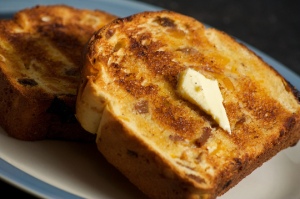 If, with the wolf at the door, there is not very much to eat, the child should know it, but not oppressively. Rather, he should be encouraged to savor every possible bite with one eye on its agreeable nourishment and the other on its fleeting but valuable esthetic meaning, so that twenty years later, maybe, he can think with comfortable delight of the little brown toasted piece of bread he ate with you once in 1942, just before that apartment was closed, and you went away to camp.

It was a nice piece of toast, with butter on it. You sat in the sun under the pantry window, and the little boy gave you a bite, and for both of you the smell of nasturtiums warming in the April air would be mixed forever with the savor between your teeth of melted butter and toasted bread, and the knowledge that although there might not be any more, you had shared that piece with full consciousness on both sides, instead of a shy awkward pretense of not being hungry.

My queen of food writing, MFK Fisher found in shared gastronomic enjoyment human dignity that defied harsh conditions. Her book How to Cook a Wolf is one my favorites because it addresses wartime eating in a such a practical and philosophical way.  For her, food becomes an agent of human dignity instead of an mere instrument of human survival through thoughtful eating.  She concludes the book with the following poignant words: 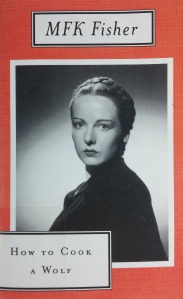 I believe that one of the most dignified ways we are capable of, to assert and then reassert our dignity in the face of poverty and war’s fears and pains, is to nourish ourselves with all possible skill, delicacy, and ever-increasing enjoyment. And with our gastronomical growth will come, inevitably, knowledge and perception of a hundred other things, but mainly of ourselves. Then Fate, even tangled as it is with cold wars as well as hot, cannot harm us.