As I mentioned in a previous post, I’ve run into the challenges of industrial, professional level baking instructions in the text On Baking. Mainly, the issue of scale. Even if I could eat two sheets of brownies, should I? So instead of relying on the single book for this baking project, I’ve decided to try different books and methods.

This week I tried a recipe from a gluten free baking cookbook. Really, how different can GF baking be? Silly me. The answer is…..very different. First of all, the ratio of liquid to dry ingredients is almost the inverse, with about a 110% liquid. This makes the “bread dough” batter-like and very unwieldy. Relatedly the process of mixing is different. A food processor is used instead of a standing mixer. The liquid, a mixture of oil and milk, is usually heated, cooled and mixed along with eggs before being added to the “flour” tapioca, buckwheat, almond or coconut. This will take me a while to get used to. Despite the effort and strangeness, the end product yields an airy flavorful bread. Given my recent lesson in focaccia, I decided to try the gf focaccia recipe to have with a bowl of warm lentil soup, dal.

I’ve made at least two mistakes so far:

The other gluten-free recipe I tried this week, unrelated to baking, was Cauliflower Fried Rice. Amazing how the finished dish looks like regular fried rice. As I said, when offering healthy alternatives, aesthetics is SUPER important. It was easy to make and delicious to eat. Will make this again and again regardless of my flexible status as a gluten free eater. 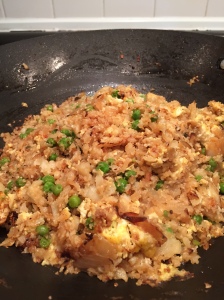 I appreciate and enjoy the creativity involved in these gluten-free dishes. Makes me rethink ingredients, textures, ingredients, aesthetics and taste. While GF cooking is not without its own challenges, GF Baking feels paradoxical and ironic.

As you know, I savor irony.