My friend Kathy gave me a jar of extra fancy Vietnamese cinnamon. Naturally, the first thought I had was….Cinnamon Rolls! It just is the best way to showcase the spice. Navigating recipe websites I landed on the Vegan Recipe for Cinnamon Rolls by the Minimalist Baker. (Thank you Minimalist Baker!)

Small disclaimer: I’m not a vegan and I used butter for this recipe. I’m just a big fan of almond milk and the “minimalist” approach.

The recipe calls for activating the yeast in lukewarm bath water temperature for the almond milk and butter mixture. I now realize I take VERY hot showers and bath. I basically cook myself.  I may have killed the yeast as the minimalist baker warned. Oh well. I’m anxiously waiting the prescribed hour for the dough to double. Literally only time will tell. Will my dough make it….oh the drama. Is there a way to know if the yeast is developing properly BEFORE adding the flour?

Okay….so far so good. The dough did rise (thankfully). It’s a wonderfully soft yet pliable dough. Rolled out easy. Rolling it up after brushing on the butter and sprinkling with the cinnamon sugar was easy. My favorite moment in this whole process has to be slicing the roll and exposing the hypnotic swirls.  Just magical.

Now waiting again….just for ten minutes while the oven heats up to 350 degrees. I guess I’ll unload the dishwasher while I wait.

The rolls have blossomed into beautiful swirls. Into the hot oven. In a half an hour the rolls should be done.

I’ve decided not to slather it with sugar icing. Many in my family will hang their head in disappointment…..”The icing is the best and most fought after part of the cinnamon roll” they would cry. But, I think I’ve already lost them with the “vegan” qualifier (although it really isn’t because of the butter). They don’t need to know. Anyway, I’m sticking to my vegan story, if it lets me have it my way in its naked cinnamon sugar glory. Shhhhh….

I can smell the yeasty, cinnamoniness at my desk…… this is going to be good. Time to get my tea, plate and fork ready. Who am I kidding…I’m not going to need a fork or a plate.  Hope Tiya gets back from school soon to try this with me.

Look at it….really…can you blame me for not covering it with icing? 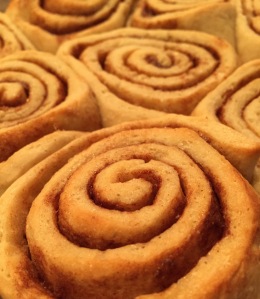 Kathy, thank you for the jar of cinnamon that started this tasty journey. Next time, let’s make it and eat it together. For now, excuse me, while I peel my swirly sweet snack away from the pan, unswirl and eat.

P.S.  Okay…fine….I did end up slathering it with sugar icing after I ate a piece. I’m sure a family crisis was averted.