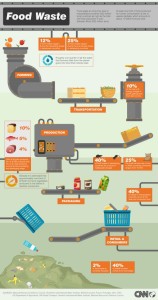 Before we blame the supermarkets for wasteful food practices, we must remember that those practices are in place because WE the consumers are complicit. The August 18th BBC news article entitled Is France’s supermarket waste law heading for Europe? cites that according to the French Ministry of Ecology 67% of food is wasted by consumers themselves. I am just as guilty. I have thrown out bananas, fruit with blemishes or squishy parts. Most of the time because I’m lazy and don’t want to take the extra few minutes to cut around bruises. A few days ago we had waffles with fruit toppings: blueberries, strawberries, mangoes and pears. The pears were soft and ripe, I diced them all but alas we did not eat them. In the trash they went. In retrospect, maybe I should’ve made a tart. The mangoes were declared the “best ever.” I pointed out that I had to cut around all the over-ripe and bruised parts to get to the juicy sweet perfect mango flesh. Let that be a lesson to myself. Don’t judge a mango by it’s bruises. In order to eat better, I’ve been buying more produce but I also find I’ve been throwing away a lot too. Mostly, because I don’t shop everyday and super market vegetables spoil quickly.  The number of eaters in my household fluctuates every week, one kid eats yellow peppers, sugar snap peas, the other eats strawberries and bananas, while another eats eggplant and pineapple. They are very hungry for very different tastes almost none of which they can finish on their own. Cravings also fluctuate. One week avocados are adored, other weeks neglected. Some weeks I have more time to cook than others. There are a lot of variables that come between my good waste-less intentions and well… The trash can. I have yet to figure out the optimal way to keep the fridge stocked while wasting little. This as much as a personal struggle as public.

As penance I’ve started to volunteer at Second Helpings. A wonderful Indianapolis organization that functions as a community kitchen making about 2500 meals daily out of rescued food from supermarkets while also offering culinary job  training. (My second shift was today. I spent four hours dicing zucchini and prepping them to be roasted. The scale of the kitchen is impressive. The organization deserves it’s own blog entry in the near future.) Very recently, I threw out some cucumbers that went soft and fuzzy white in my refrigerator bin. Yuck. Sorry cucumbers for not loving you enough. Yes, it was time to volunteer.

Here is my beginning research about food waste. Staggering numbers. According to the UN’s Food and Agricultural Organization, “one third of all food produced for human consumption is lost or wasted before it is eaten.” Mindful eating can certainly reduce the number of hungry people and increase the number of hungry philosophers! In theory. The idea leads us back to childhood stories designed to help us finish the food on our plate. But, how does my not wasting food, help feed the hungry?

Wishing you mindful and delicious eating,