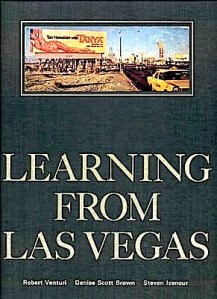 Learning from Las Vegas by Robert Venturi and Dennis Scott Brown, published 1977, was a postmodern call to celebrate the vernacular and everyday. The images of the strip bustling with billboards and signs challenged the way architects thought about the formal role of commercial and public buildings. The architects, Venturi and Brown, argued against modernist “holier than thou” purist abstraction and suggested that the Vegas strip satisfied a collective emotional longing for the imagined American main street. The post-modern architectural manifesto venerated buildings that spoke volumes through billboards and bright signs of human lust, gluttony and greed. Building that spoke of the messy reality of life instead of an idealized vision projected on a drafting table.

One might argue that today Las Vegas is anything but common and everyday and has lost its 1970s main street appeal. Sure the scale and brightness of the signs have grown to fantastic proportions yet the content is the same: gambling, entertainment and food.

The extravagance of Las Vegas buffets has long been legendary. My recent visit to The Bacchanal at Ceasar’s Palace certainly supports it’s fame by boasting over 500 international dishes. I felt both dizzy with the seemingly infinite choices and doomed in my incapacity to enjoy all of it. An existential crisis of sorts looking into the cauldron of infinite gastronomical choices. The scripted labels announcing each dish to the diner mimicked the billboards outside. The buffet is an easy architectural translation of gastronomic and aesthetic choice where individual preference has priority over collective good (for example: a school cafeteria lunch). The Bacchanal was NO school cafeteria.

I was surprised how deliberately and unrelentingly celebrity chefs and their restaurants were promoted. Indeed, food tourism has taken a very strong cross media hold in Las Vegas. As an avid Food Network, Cooking Channel viewer I was both soothed by the familiar and overwhelmed by the dominance of personality over food. Are we witnessing the rise of popular haute cuisine as inaccessibly expensive exercises of vanity and commerce or is it a sign of innovative gastronomic experiments? I imagine a bit of both, but how do I decipher the difference? First of all, I can’t afford the $$$$ Yelp range, so that takes care of that dilemma. Even so, there still remains much to choose from.

The privilege of individual preference particularly in Las Vegas makes my experience limited and almost too particular to be worth rational judgment. So, the following is not a review but merely an account of three meals touched by television celebrity. Were my expectations different? Did my food taste different? Did the “chef-signature” affect the quality of the experience? In the buffet of signs, architectural and gastronomic, how do we make a choice?

Yelp did not help me in this overwhelming situation where the quality is generally equivalent. Reviews only matter if you know what you personally like. Maybe I like standard overpriced well cooked steak and potatoes, maybe my feet are tired and despite mixed reviews and warnings of bad service, I’ll eat anything. Maybe I’m lost and I can’t find the four star rated restaurant and instead I have to settle for something else that turns out to be fantastic……………sometimes the uncertainty is too great for the collective might of Yelp. As it should be.

Boasts the world largest chocolate fountain. The choice to visit was easy. Did not know much about the chef and consequently did not have specific expectations. Had breakfast of an Almond Brioche. The bread was a beautifully toasted platform for the slightly sweet almond cream with roasted and crunchy almond flakes. It was delicate and substantive, creamy and crunchy, sweet and slightly salty from the almonds. It was early enough, without a crowd, to eat and enjoy the view of the chocolate fountain. The small and intimate scale of the space heightened the glistening and precious sweets beckoning beyond the glass cases. Next time, I’ll have to have something chocolate. In context, the chocolate fountain made sense and was not a mere publicity stunt. The chocolate fountain summoned us like a religious relic and we as pilgrims rejoiced at the sight and taste. The pastries were quite literally and visually the centerpiece of the establishment (not the personality of the pastry chef). I appreciate the obvious love of crafted sweets that converts indulgence into an art form.

We were tired from walking in the sun and looking for a break around three in the afternoon. Table Ten was a lucky surprise. My sister and I shared the little lobster rolls. Our meal was too small and tame to justify the big personality of BAM! Emeril Lagasse. I can’t fault him for my sense of being underwhelmed. The décor that included multiple chef coats, Emeril spice mixes, cooking tools, alongside the open kitchen highlighted the celebrity chef appeal of the restaurant. The familiar taste of the lobster roll was amplified by a touch of celebrity vanity. Maybe the Lagasse signature convinced me that it was better than it was. Served the same thing anywhere else, my response would be “ Wow! this is very good” instead of “this very good and of course it should be.” Did my high expectations weaken my experience? Does more information enhance or diminish the taste? Like knowing how something is made or who made it?

China Poblano at the Cosmopolitan by Chef Jose Andres 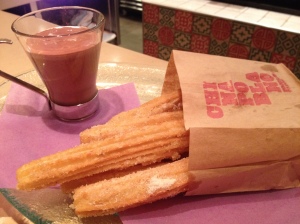 Intrigued by the hybrid concept, I hoped and planned for visiting China Poblano. Visually the restaurant maintains the duality by splitting the space into the China side with a dumpling-making area and the Mexico side with a taco-making area. Visitors seated at the “bar” that winds across both work stations can watch the busy construction of dumplings and tacos as they eat. The walls are decorated with masks and large prints depicting both cultures. The restaurant boasts a 40-40-20 split, whereby, each culture is represented 40% and 20% of the dishes represent a “marriage,” not a fusion, of flavors (this according to the hotel publicity channel). Owing to the dual theme (and being already very full from our visit to Table 10) we ordered the guacamole that was being made in front of us at the “bar,” salsa and chips and the beef watermelon radish suimai. Our order reflected the combination of cultures and as well as a combination of familiar and unfamiliar tastes. The beef suimai was new and unfamiliar, tasted like an exotic lemongrass flavored barbacoa wrapped in a dumpling noodle. Experimentation, playfulness, excitement infused the food and the environment. It is an appropriate restaurant for The Cosmopolitan. The theatricality of the space and food production was a happy surprise. It was a learning experience: of how the familiar can feel strange like fantastically fresh guacamole in warm corn tortillas and conversely, how the strange can feel familiar like beef suimai. The tastes were beyond judgments of good or bad: I don’t know if I “liked” the suimai. BUT…it certainly was interesting and thought provoking. To me, a philosopher, that’s worth it. I had also been to Jaleo, same chef but with a very different vibe (Spanish tapas), in D.C with my daughter for her birthday. The menu, atmosphere, food, wait staff, open kitchens everything about China Poblano conveyed its legend of a kidnapped Asian girl taken on a long voyage to Mexico. It makes me wonder about other possible legends, a Bengali in Bolivia? My visit to China Poblano was certainly a trip!

Bobby Flay’s Burger Palace was on my wish list. I appreciate the bright open welcoming design of the restaurant. The menu is visible from the street as are diners enjoying the fare. Again, much like the many restaurants in Las Vegas with open kitchens and dining rooms, eating is a spectacle at the Burger Palace. Alas, I had no room to take in the show.

The spectacle of food raised to level of theatrical entertainment competes for our attention and money. Images of the Cake Boss, Giada, Bobby Flay are displayed alongside the Beatles, The Blue Man Group, Cirque de Soleil, magic shows and adult entertainment. The visual and the gastronomic are now combined as the theatrical experience of Las Vegas hyperreality. This is not the era of static billboards but giant dynamic video screens. Celebrity chefs perform online, on T.V and through the fantasy of their restaurants. What I learned through visiting these three establishments is their vision as displayed and interpreted by designers and their taste as performed and imitated by local culinary talent. It’s a production like any other.

So, does the “signature-chef” experience affect the quality of the experience? Like all good philosophical questions the answer is both: yes and no.

For me (quality level being generally equal) the answer depended mostly on my expectation and my physical state (hungry, tired). How do you decide where to go, what to eat and how much you enjoyed the experience? In the buffet of restaurants what is your criteria? What LOOKS good to you?

It seems, there is still a lot to learn from Las Vegas both visually and gastronomically.