The emergence of a national cuisine in contemporary India suggests a processual model that needs to be tested comparatively in other postcolonial situations in the contemporary world. The critical features of this model are the twin processes of regional and ethnic specialization, on the one hand, and the development of overarching, crosscutting national cuisines, on the other. These processes are likely to be reflected and reproduced in cookbooks designed by and for the urban middle classes, and particularly their female members, as part of the larger process of the construction of complex public cultures involving media, travel, and entertainment.

This quote is from Arjun Appadurai’s conclusion to his 1988 essay, “How to Make a National Cuisine.” I like the parallelism between the dynamics of regional specialization and national cohesion on the one hand and national specialization and international cohesion, on the other. Food as a cultural site that fosters the cooperation of variety and unity, difference and identity on familial, regional, ethnic, national and international levels make cookbooks diplomatic documents of a given time and place. When I look at cookbooks in this light of cultural collision and exchange, the recipes become interesting exercises of culinary diplomacy.

I always found it difficult to explain how Bangladeshi food is related, yet distinct from Indian cuisine (as defined by Indian restaurants serving the West). Now I realize, this question of a national Bangladeshi cuisine in the international, expat context addresses only one side of the identity crisis. There is also the question of a Bangladeshi national cuisine that recognizes all it’s regional cuisines. Cookbooks by definition are for those who wander from tradition or from home. The more we wander and wonder, the more we build our collective identity. Isn’t that poetic? There is a philosophical impulse as to why so many food blogs combine food, travel and family.

I, a hungryphilosopher, believe, shared questions, not answers, unite us. “How does it taste?” is a loaded cultural question! Over the years, my mom, supplier of cookbooks and avid collector of recipes, gave me three cookbooks that support Appadurai’s dual model of making a national cuisine. They show the growing urban, literate, middle class, as well as, an interest in travel both domestic and international. On a personal level, these books represent my mom’s hope that I retain tastes of Bangladesh that flavor my identity.

All these books are primarily intended for domestic consumption and ex-patriots hoping to recreate “home-food.” The more willing a nation is in supporting regional and cultural differences, of recognizing internal “ethnic-others” the stronger it is able to cook a national cuisine. The progression of Bangladeshi cookbooks in my library shows an emergent respect for regional cuisines but has yet to embrace “ethic-others” into a conversation about a national Bangladeshi cuisine.

In 1976 first edition introduction Siddiqua Kabir, the pioneer in Bangladeshi cookbooks,  talks about the book as serving women’s curiosity for foreign foods as well as a need for preserving traditional recipes. In contrast, the introduction to her 1984 Bangladeshi Curry Cookbook, written in English, aims to introduce Bangladeshi curries to non-Bangladeshis.

This dual-language, Bangla and English, book with glossy images and advertising (for dish washing liquid) on every page shares the fusion recipes of celebrity-chef Tommy Miah. 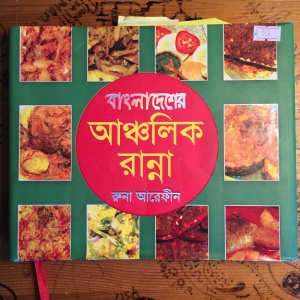 This book written in Bangla is my new favorite. The introduction talks about rescuing threatened regional recipes and traditions, about meeting cooks across the country, about a collective respect for the craft of cooking. I’ve learned a lot about what I thought was familiar yet overlooked.

A more detailed study of Bangaldeshi cookbooks might show a developing national cuisine with its own unique characteristics. How do other emergent national cuisines cook up their identities? Any readers out there willing to share? Belize, Costa Rica, Nepal, Cambodia, Nigeria, Bosnia……