Deep in our refrigerator,
there’s a special place
for food that’s been around awhile…
we keep it, just in case.
‘It’s probably too old to eat,’
my mother likes to say.
‘But I don’t think it’s old enough
for me to throw away.’

It stays there for a month or more
to ripen in the cold,
and soon we notice fuzzy clumps
of multicolored mold.
The clumps are larger every day,
we notice this as well,
but mostly what we notice
is a certain special smell.

When finally it all becomes
a nasty mass of slime,
my mother takes it out, and says,
‘Apparently, it’s time.’
She dumps it in the garbage can,
though not without regret,
then fills the space with other food
that’s not so ancient yet 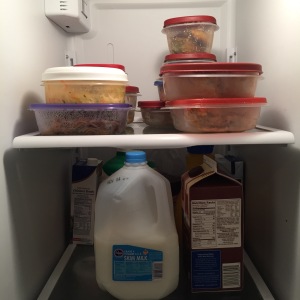 I have long struggled with this question about when to let go of left over food. There are times, as I am filling a container, I know that the contents will not be eaten. Ever again. I can either throw it out right then and avoid clogging up the refrigerator or I can with a guilty heart keep the unwanted leftovers to throw out another day. As if, the waste becomes justifiable when allowed to form mold that absolves us of guilt. Of course, It’s the mold’s fault I have to throw it out, not my own wastefulness. All of us make these decisions when asked at a restaurant “do you need a container” or when we cooked too much or not very well. Confessedly, there are many times I’ve thrown out edible but unfortunate cooking experiments hoping to make the evidence of my failure disappear as quickly as possible. Other times I’ve saved a meal so I might transform it into a different meal. Most often the celebrated left-overs get divided into lunch containers and taken to work or frozen. Left over delight lunch becomes own very own homemade buffet experience. Often I ask Jim to share left over baked goods at work. Some foods are easier to share or easier to waste than others. Each dish, meal has its own waste potential that varies according to who eats it. I haven’t found my rule or criteria, yet.

What criteria do you use to throw food out? To waste? What’s in your refrigerator now?